TIGER – A NEW GENERATION OF HELICOPTERS

The TIGER helicopter is a new generation multi-role combat helicopter fully developed in Europe and currently in service in France, Germany, Spain and Australia. It was designed from a common platform complemented with different elements building a number of variants tailored to the customer requirements.

The TIGER programme was initially a programme between France and Germany for the acquisition of anti-tank and support helicopter systems in response to common military requirements. Three versions were initially identified: HAP (Hélicoptère d’appui et protection), HAC (Hélicoptère anti Char) for France and the PAH2 (Panzerabwehrhubschrauber 2).

In 2014 and 2015, Nations decided to adapt their fleet with the following consequences:

The Programme was placed under OCCAR responsibility since its legal status was achieved in 2001.
In 2004, Spain joined the programme and its specific requirements for the platform led to the definition of a new version: HAD (Helicóptero de Ataque y Destrucción).

The co-operation with Australia, has been formalized in 2009, granting Australia an Observer Status in the TIGER programme.

For optimising the commonalties and reducing the costs, all versions of the TIGER have been developed from a common "basic helicopter". The "basic helicopter" corresponds to the vehicle development and to the basic avionics. It includes a GPS/Doppler navigation system coupled with a digital map generator. An accurate automatic flight control system with sophisticated upper modes allows decreasing the pilot workload in adverse conditions. Additionally, IFF, electronic counter measure, radio communication and radio navigation are managed by the basic system.

Nations have initiated the discussions regarding the Tiger mid-life upgrade with the aim to have the first H/C delivered in this up-to-date standard by 2025/2026. 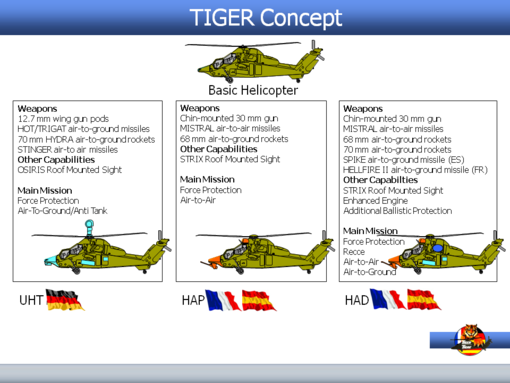 The four bladed rigid rotor and an accurate automatic flight control system with sophisticated upper modes provide the TIGER with an extraordinary maneuverability . The power is granted through the engines MTR390-2C specifically designed for the TIGER by MTR (consortium created by MTU, Turbomeca and Rolls Royce). There is an enhanced version (E) of the engines to be initially installed in the HAD variant. This version of the engine provides an additional 14% of power.

Already deployed in two different theaters (land and sea), the TIGER has proven its capability to be operated without heavy infrastructures and low maintenance manpower maintaining an optimal availability.

The HAP and UHT are in service since 2005. The HAD variant was launched later, with a qualification to be achieved in 2014. As of today more than 65 flying European TIGERs and 22 Australian ARH have been produced and delivered to customers. 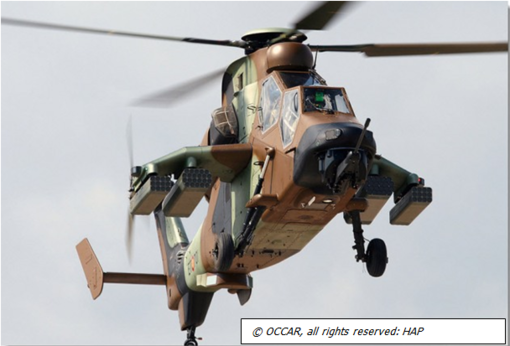 The HAP is an escort and close air support helicopter for the French and Spanish Armies, featuring also air-to-air capability. In this combat support role, its 30 mm turreted gun offers air-to-ground short range firing capability, complemented by the 68 mm rockets for medium to long range and the possibility to target air threats with the MISTRAL missile.

The French version of this TIGER has continuously been deployed in Afghanistan since 2009; it also proved its precise and versatile combat capabilities in the Lybian conflict in 2011. Operating from the French assault vessel “Tonnerre”, the HAP presented remarkable deployment flexibility not only from shore but also under the challenging weather and naval circumstances off-shore. 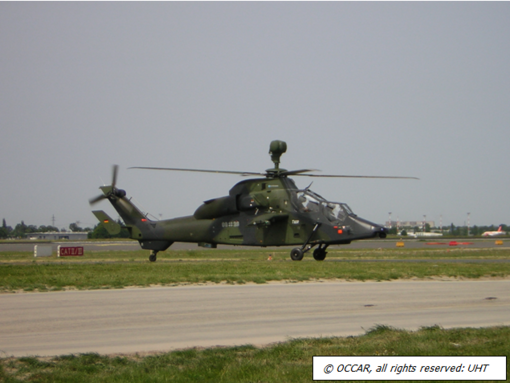 The 12.7 mm gun pods under the UHT wings as well as 70 mm rockets and HOT missiles present striking short range arguments as well. The air self-defence is ensured by STINGER missiles.

The German TIGER accomplished its deployment to Afghanistan in the frame of the Stabilisation German Army Rapid Deployment (ASGARD) from December 2012 to June 2014. A selected number of TIGERs have been modified with regards to additional ballistic protection, engine air particle separation, mission data recorder, SatCom and various software improvements. 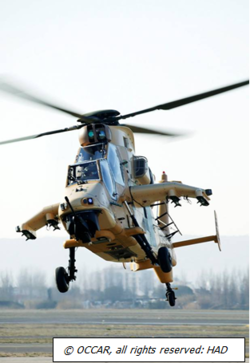 Following the entry of Spain on the TIGER Programme in 2004, a major improvement of mission capabilities was launched under the HAD variant with the integration of two air-to-ground missiles.

On the one hand, the visible/infra-red, optionally wire-guided “Spike” from RAFAEL allows seeing the approaching target from the missile point of view and steering the missile precisely until impact or using the fire-and-forget mode.

On the other hand, the HELLFIRE from Lockheed Martin is a combat proven and efficient laser-guided missile, combined either with a TIGER autonomous designation (improved STRIX roof-mounted-sight) or with an external designator.

The TIGER In Service Support phase has ramped up significantly since the first deliveries in 2005.

From the very beginning, the participating Nations decided to implement a common approach to benefit common solutions in order to achieve the maximum availability of the fleet and the costs effectiveness.

The In Service Support to the TIGER system follows a Through Life Management Approach covering from the entry into service till the disposal of the system. The main target of this strategy is to minimize the Life Cycle Cost, particularly by using a common support whenever possible.

OCCAR has been entrusted to manage all engineering and logistic aspects in the whole spectrum of ISS activities up to 7 tasks: Material Support, Maintenance, Repair &Overhaul, Configuration and Modification, Technical Events, Training Means, Technical Publications and Post Design Activities.

The TIGER Weapon System uses the ASD standards and is serviced by various logistics electronic systems in order to efficiently support the management of spares and repair activities. The use of a corporate Logistic Information System is in preparation, being already bridged by an OCCAR in-house solution connecting users, industry and OCCAR to share Queries and Technical Events
The flexibility of the organization to provide the adequate support has been tested on several deployments into different theatres already performed by all three nations.

Training
This cooperative philosophy has also spread to other areas such as training. The simulation has proved to be the most cost effective mean to train both air crews and maintenance staff and Nations have decided to share the systems. 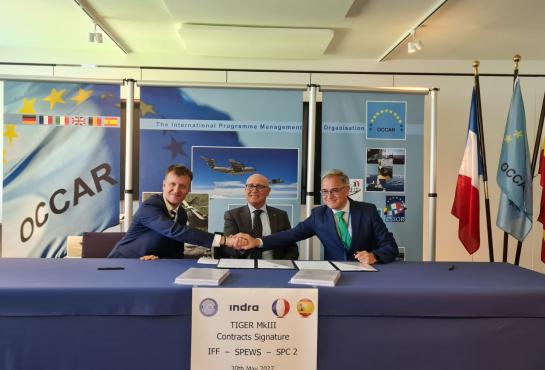 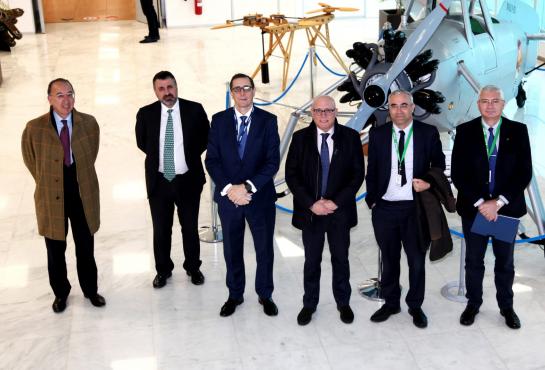 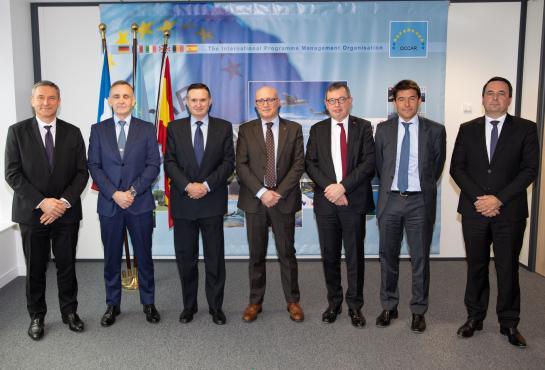 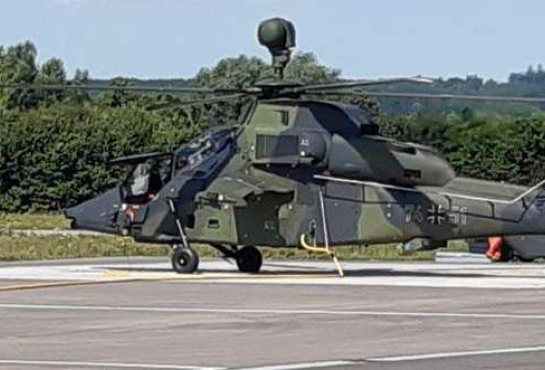 A key milestone was met for the German TIGER Programme in July 2020 with the acceptance of the first of 33 retrofits... 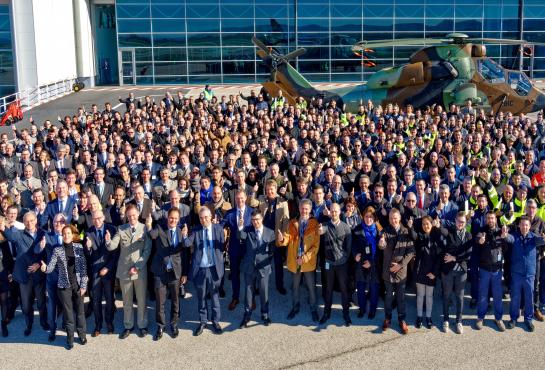 The last HAD serial TIGER attack helicopter was delivered to the French Army on 5th February 2020 in Marignane.  185 Tigers have been produced for France, Germany, Spain, and Australia. 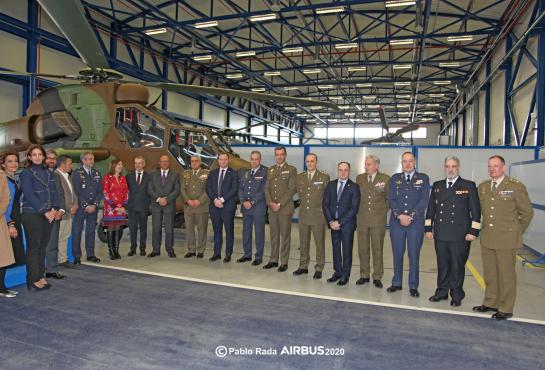 On 14th January 2020, Airbus Helicopters delivered the last Spanish HAD Helicopter to the Spanish Army.

For further information about the TIGER Programme, please contact the Programme Division or the Prime Contractor.