Official ceremony for the first A400M delivery to Turkey

The official ceremony for the delivery of the first A400M ‘Atlas’ (Manufacturer Serial Number 009/MSN009) to Turkey was held on 12 May 2014 at the Military Airbase Command in Kayseri.
The event was attended by the Turkish President Abdullah Gül, Chief of the General Staff General Necdet Özel, Minister of National Defense Ismet Yılmaz, Commander of the Turkish Air Force General Akin Öztürk, Undersecretary for Defence Industries Ismail Demir, and high-ranking military officers, government authorities and defence industry executives. OCCAR-EA was represented by the Director Tim Rowntree and the A400M Programme Manager Nicolas Hue, as well as a number of A400M Programme Division staff. 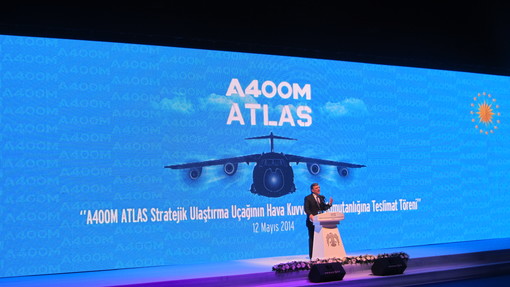 The support of this aircraft has been achieved with the award of a contract by OCCAR-EA to AMSL on 9th April, along with the on time delivery of spares, training courses and documentation, enabling the first flights performed in Turkey to be fully successful.
Turkey is the second national customer to be receiving the A400M and MSN009 is the third aircraft in use following the delivery of two aircraft to France in 2013. A total of ten aircraft will be delivered to Turkey by 2018.