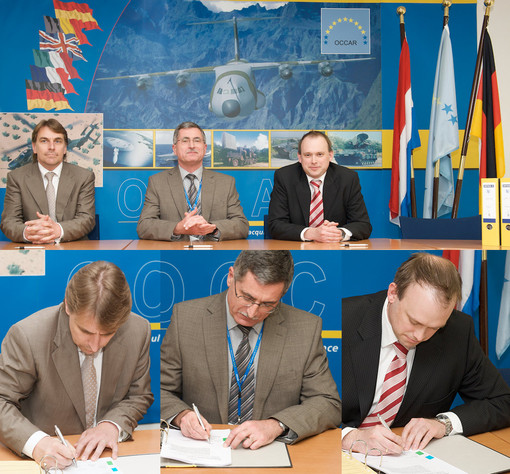 New versions of the BOXER development and series production contracts are in place. The OCCAR-EA Deputy Director and the Managing Directors of ARTEC, Stefan Lischka and Karl-Ulrich Zulauf, signed the contracts on 30 April, the Birthday of The Netherland’s Queen Beatrix, known as “Koninginnendag”.

The new contract amendments are necessary due to changes in homologation requirements, changes of vehicle interior due to latest developments in other national programmes and changes in qualification procedures that are more focused on the quality of the series vehicles than was the case on the prototypes.

The contracted changes have already been introduced into the series production, with the first drive module hulls and mission modules for the vehicles now on the assembly line of Krauss-Maffei Wegmann (KMW).

The programme is on track for the Roll-Out of the first BOXER series vehicles on 10 September 2009 at KMW facilities in Munich.