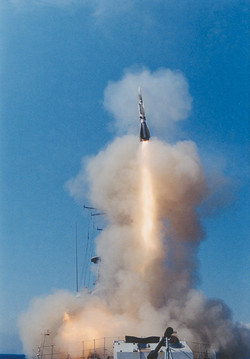 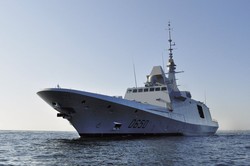 Monday, 4th February 2013, the Aquitaine, the first frigate of the French Navy’s FREMM class (Multi-Mission Frigate), has successfully fired its first air defence missile Aster 15 in the Mediterranean from the DGA’s Missile test centre located on the Island of Levant. The FREMM is the third type of ship of the French Navy equipped with Aster missiles after the aircraft carrier Charles de Gaulle and the air defence frigates Forbin and Chevalier Paul.

The firing took place in the framework of the Military Specifications Verification (VCM) of the Aquitaine, a further step towards its admission to Active Service (ASA) in the Navy. "This firing has allowed the French Navy to validate concretely all stages of the launch of an Aster 15 missile from a FREMM" says CV Benedict Rouvière, Captain of the frigate. "The firing sequence encompasses the complete process from the loading of the missile until the actual destruction of the target covering the key phases of the target detection by radar and the target engagement by the ship’s combat system operators."

This firing was prepared and conducted in cooperation by the crew of the Aquitaine and teams from the DGA, DCNS, MBDA and OCCAR (Organisation for Joint Armament Cooperation). For all of them this success marks a new step in demonstrating the capabilities of the FREMM. "The validation of this Aster firing provides the Aquitaine with the fundamental capability of its auto-defence system," adds CV Rouvière.

The FREMM ships are heavily armed: Exocet 40 sea-to-sea missiles, Aster anti-air missiles and MU90 torpedoes. The first nine frigates will predominantly conduct anti-submarine warfare missions, while the last two frigates, specialised in anti-aircraft warfare, are designed to protect a carrier or amphibious battle group against aircraft and missiles. All FREMM can also host the Cayman Marine helicopter (NH90), as well as Special Forces and their equipment.