On 24 July 2014, the A400M MSN10 (4th A400M production aircraft and 3rd of France in service) was delivered. It is the fourth operational Aircraft with additional capabilities compared to the three previous ones such as fuel inserting system and improvements in the cargo systems and avionics.

The Acceptance Process of MSN10 has been carried out by BDT (Buyer Delivery Team) comprised by experts from both French DGA and OCCAR-EA. This combined team along with industry has first performed a visual inspection of the whole plane, including exterior fuselage, cockpit, cargo and the four engines. Afterwards a functional verification has been performed first on ground and later in flight till altitudes of 35.000 ft in order to verify that all the systems of the aircraft behave correctly and in accordance with the specification.

To enable the delivery of MSN010, OCCAR-EA has prepared and signed in behalf of France a Contract Amendment related to the implementation of the LPM (Loi de Programmation Militaire) conditions and has signed in behalf of France and the UK a contract amendment related to the definition of “Batch 1 aircraft”, including FR/UK swap of production aircraft. This concludes extensive work performed by all parties that define the conditions of delivery for the four FR Batch1 aircraft (MSN10, 11, 12 and 14) and that update the A400M delivery schedule.

MSN010 is now a French aircraft and has flown back to Orleans Air Base the same day the transfer of title was signed. 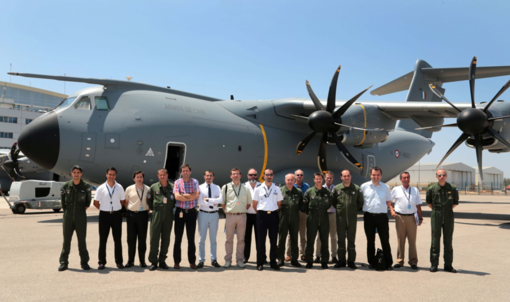