The COBRA Radar Environment Simulator (CRES) Contract has been signed between HENSOLDT Sensors GmbH and OCCAR on behalf of Germany and France, and entered into Force on 07 June 2021.

The CRES is a piece of test equipment and designed to generate artificial Radar-Returns (In-phase (I) and Quadrature (Q) -Signals) and in doing so emulates the whole RADAR frontend hardware. This allows to simulate all kind of targets without having the need to actually transmit and receive radar signals via the COBRA antenna. For this purpose the CRES can be operated in a closed maintenance hall or even inside a COBRA shelter. The IQ-signals generated by the CRES are fed-in into the Signal Processor followed by the Data Processor and then displayed to the COBRA operator. As the CRES is emulating the Radar frontend, this Radar frontend naturally cannot be tested by the CRES (this would be done by the Radar Target Generator - RTG - which was put under MLU contract recently). 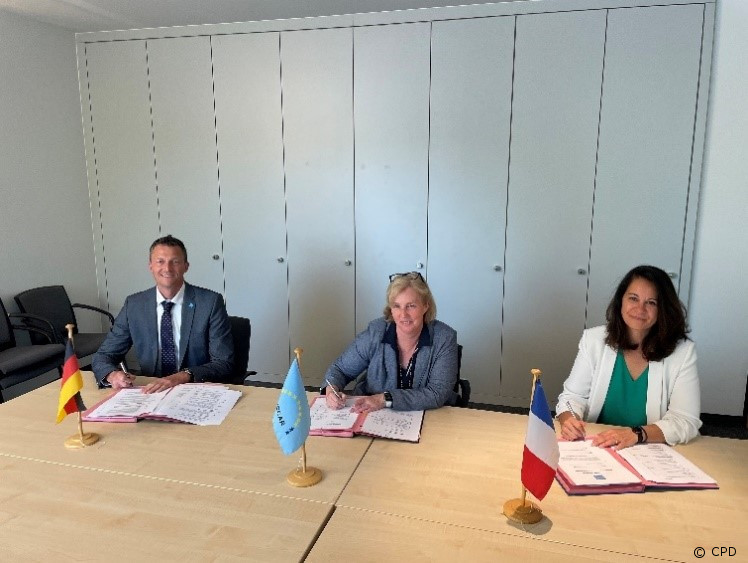 The CRES is the key element to test and verify the COBRA Radar performance in a laboratory environment with reproducible target trajectories. For the target trajectories the CRES can simulate all kinds of ballistic artillery projectiles (missiles, mortars, howitzer or gun projectiles) (for which the COBRA is designed to report) as well as all kinds of environmental and man-made disturbances (so called radar clutter) like rain, birds, chaff, air planes, helicopters or ground vehicles (for which the COBRA is designed to suppress).

As there are no mechanically moving parts and the Radar is not forced into radiation, the CRES will always be used in favour of the Radar Target Generator (RTG) when a large number of real or false targets shall be simulated simultaneously over the full azimuthal search span for an almost limitless time and is therefore better suited to generate statistic results on Radar performance and to qualify new RADAR Software baselines.

The current CRES is in operation since the early 1990s and has become obsolete and unreliable. The replacement with a CRES developed and used by HENSOLDT for their third party COBRA Systems has been seen as the most economical solution.

The COBRA Systems have been affected by the shift of the Nation’s operational requirements, particularly with the need for deployments over long periods, with either fixed or a small number of locations. The COBRA System is also now subject to more active 24/7 surveillance missions, in more diverse and often hostile scenarios.

This partnership underlines and reiterates the commitments of France and Germany in favour of reinforced European cooperation in the fields of Security and Defence and of development towards a more united, resilient and sovereign Europe.