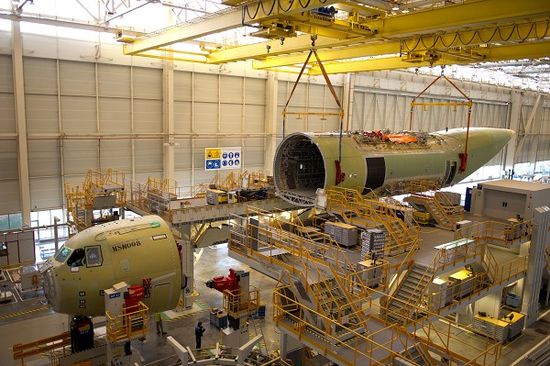 The photograph shows the MSN8 nose and fuselage in the Final Assembly Line.

The Airbus Military A400M final assembly line (FAL) in Seville (Spain) has begun working on the second serial production A400M. The integration of the wings and central wing-box for this aircraft, known as MSN8, began in February. The rest of the main components of the second A400M destined for delivery to a customer –the French Air Force– arrived at Seville last week: the vertical tailplane (VTP) from Stade (Germany); the nose from Saint Nazaire (France), the horizontal tailplane (HTP) from the nearby Tablada site (Seville), and the fuselage from Bremen (Germany).