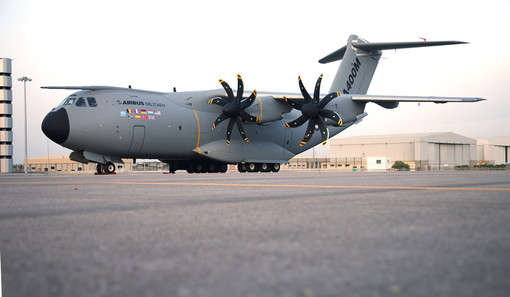 The first Airbus Military A400M has been handed over to the Airbus "Flight Test" organisation on 12 November, paving the way to the beginning of the various ground tests which are to be performed before the aircraft takes to the air before year end. The purpose of these ground tests is to verify that all aircraft systems, powerplant and flight test instrumentation work properly, in order to ensure a safe First Flight, and subsequently an efficient flight test campaign.

The ground tests include static tests and engine run-ups during which the interaction between all systems, the powerplant and the aircraft is controlled and validated. The correct operation of the telemetry system which will be subsequently used to follow the flights during the development campaign will also be checked during these ground test campaign. Following satisfactory completion of the static tests, the first taxi runs can start. These begin with low speed taxis (up to 60 kts) and brakings, and are to be followed by high speed trials with a rejected take-off at about 120 kts. During these trials, the behaviour of all systems, and the turboprop engines, as well as the reaction of the aircraft to braking and lateral control, is thoroughly checked.

After each trial a thorough analysis of the findings as well as the status of the aircraft will determine when the next trial will take place, leading to a first Take-Off before year end.