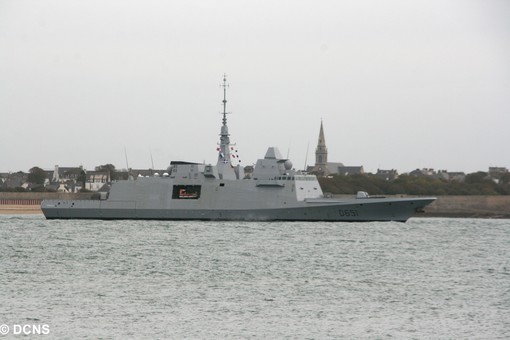 On the 25th October 2013, the French Navy’s Second of Class FREMM Multi-Mission Frigate “Normandie” has started its first sea trials in Lorient.

These first sea trials will be carried out for several weeks and will involve industrial teams led by DCNS, the French Navy crew, the French Defence Procurement Agency (DGA) and the OCCAR FREMM Programme Division.

The first sea trials and tests will focus on the propulsion system and ship’s navigation. The FREMM’s high-performance hybrid CODLOG (COmbined Diesel eLectric Or Gas) power package combines a gas turbine for mechanical propulsion at speeds exceeding 27 knots and electric motors for quiet, low-speed propulsion. The sea trials of the combat system will start in early 2014.

The delivery of the “Normandie” Frigate is planned in August 2014.

The First of Class frigate “Aquitaine” was accepted by OCCAR on 23rd November 2012 and delivered to the French Navy. Five other French FREMM frigates, including the Normandie, are currently being built simultaneously and are at different stages of assembly and construction at the DCNS Lorient shipyard.