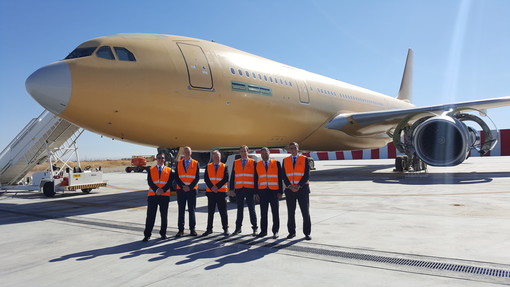 The MMF Programme Division at the Airbus factory at Getafe, Spain.

Within the Air-to-Air Refuelling Initiative of the European Defence Agency (EDA) several Nations agreed to co-operate in a multinational Programme. The Multinational Multirole Tanker Transport Aircraft Fleet (MMF) will provide additional tanker and transport aircraft capability in Europe. It will operate the Airbus A330 MRTT, designed for refuelling other aircraft in flight and for transport of passengers and cargo, including medical evacuations. The MMF aircraft will be owned by NATO and operated in a pooling arrangement; an effort initially funded by Netherlands and Luxembourg. But MMF is open to other European nations and the MMF Acquisition Contract offers to join the MMF with options for additional aircraft.

OCCAR is managing the MMF acquisition phase on behalf of the NATO Support & Procurement Agency (NSPA), including the first two years of support, and NSPA will be responsible for life-cycle management of the fleet from then on. First aircraft delivery is planned for the beginning of 2020.

The Airbus Defence and Space A330 MRTT is the only new generation strategic tanker/transport aircraft flying and available today. The large 111 tonnes/ 245,000 lb basic fuel capacity of the successful A330-200 airliner, from which it is derived, enables the A330 MRTT to excel in air-to-air refuelling missions without the need for any additional fuel tank. The A330 MRTT for MMF will be equipped with proven air-to-air refuelling systems including an advanced Aerial Refuelling Boom System and a pair of under-wing hose and drogue pods. The A330 MRTT for MMF can also be used as a pure transport aircraft able to carry up to 267 troops, or a payload of up to 45 tonnes/99,000 lb. It can also easily be converted to accommodate up to 130 stretchers for Medical Evacuation (MEDEVAC).