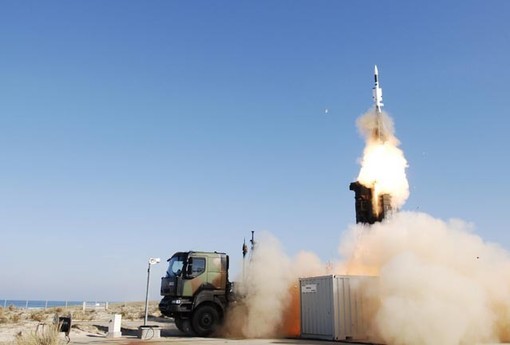 On 18 October 2010 the first qualification firing of SAMP/T against a target simulating a theater ballistic missile threat took place successfully in the Missile Test center in Biscarrosse in France.

The trial, under the responsibility of OCCAR, was one of the key events in the frame of the Phase 3 contract.

With this test the SAMP/T system, already qualified against conventional threats in 2008, has accomplished the first step for the validation of the anti- theater ballistic missile operational capability.

The SAMP/T system is part of Franco-Italian FSAF Programme, developed for assuring a medium range Surface to Air defense capability against conventional and TBM threats.

By 2013, 15 SAMP/T sections will be procured and delivered to the French Air Force (10 systems) and Italian Army (5 systems).

Operated by 14 people, the SAMP/T system consists of a fire control unit based on ARABEL radar, a launching system with 4 launchers and the ASTER 30 Block1 (owning to the ASTER missile family, a vertical launched two-stages missile).

The SAMP/T is the first European system able to intercept theater ballistic missile and can be considered an effective asset for the Active Layered Theatre Ballistic Missile Defense (ALTBMD) Programme within NATO.