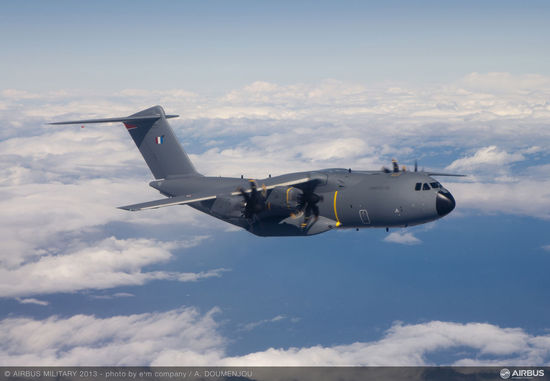 The first production A400M flew for 5 hr 42 min during its maiden flight from the Seville final assembly line. It will be delivered to France in the coming weeks. (Airbus Military)

The first production A400M new generation airlifter made its maiden flight on 6 March 2013, marking a key milestone towards its delivery to the French Air Force. The aircraft, known as MSN7, took off from Seville, Spain, at 11:48 local time (GMT+1) and landed back in Seville 5 hours and 42 minutes later.

According to the AMSL press release, experimental Test Pilot Hugues Van Der Stichel, who captained the flight, said after landing: “The performance of the aircraft was as expected and we had a very smooth flight, confirming the great handling capabilities of the aircraft. The result of this first flight gives us full confidence for the on-time delivery to the French Air Force”.