On 16 November 2010, the first EDA – OCCAR Through Life Management Conference took place at the EDA premises in Brussels. About 100 participants found their way to this Conference where a panel of experts from EDA ( www.eda.europa.eu ), OCCAR, Industry and Nations offered a comprehensive overview on the TLM topic, with each of the panelists focusing on his role and area of interest within the broad domain of TLM. 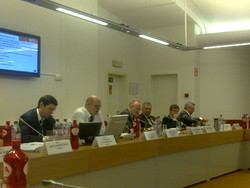 Christian Schlieppmann, EDA Armaments directorate, explained the Strategic importance of TLM in the framework of the European Armaments Co-operation. He was followed by Dietmar Fiegas, the OCCAR-EA ILS/ISS senior managing expert, who explained the concept and the implementation of the Through Life Programme Management in the OCCAR environment.

The industrial point of view on TLM was presented by Ing. Claudio Buccini from Finmeccanica, acting as Chairman of the OCCAR Industrial Logistic Support Panel and by a co-presentation on data exchange standardisation by Albert Grabmeier, Cassidian Air Systems and Yves Baudier from EADS Innovation Works, acting as ASD SSG Chairman.

The National contributions to the conference came from the UK DE&S TLS Director and Chairman of the OCCAR In Service Support Committee, Brig. Martin Boswell and from the French DGA represented by IGA Patrick Dufour.

Judging by the degree of interaction between the panel and the audience, it’s clear that TLM is high on the agenda of every stakeholder in the European Armament Co-operation.

The Conference has been a step in the right direction, but there are still issues to be addressed. Discussions about interfaces between four active entities - participating Member States, EDA, OCCAR and industry - will continue. Therefore, at the end of this first Conference OCCAR-EA was kindly invited by the other stakeholders and willingly accepted to take this initiative forward by taking the lead for organisation of the 2nd Conference in 2011 addressing especially the progress made in the TLM approach for European Armament acquisition during the year to come.

You are all already invited to this 2nd Conference for which the necessary details will be distributed in due time.

Hope to see you all there…