Final assembly of the first A400M for France starts in Seville 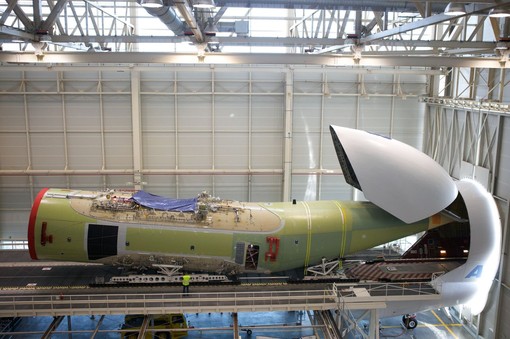 Following the launch of A400M series production last February, Airbus Military has begun final assembly of the first A400M that will be delivered to a customer - the French Air Force. The fuselage for this aircraft, known as MSN7, arrived at the final assembly line in Seville (Spain) on board an Airbus Beluga. The wings and nose arrived some days earlier and the integration of the central box and outer wings has already begun. The horizontal tailplane (HTP) is expected next week and the vertical tailplane (VTP) in two weeks time.

France will receive its first A400M military airlifter around the turn of the year 2012/2013.

The photographs show the unloading of the fuselage from an Airbus Beluga in the A400M final assembly line in Seville(Spain).