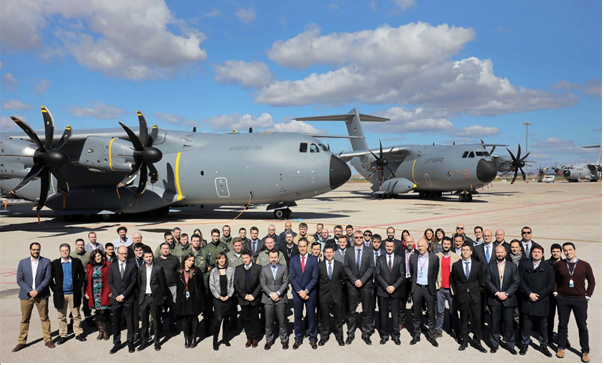 Airbus has for the first time formally delivered two A400M new generation airlifters to two different nations in one day. The company handed over the aircraft on 20 March to the European Organisation for Joint Armament Cooperation (OCCAR), in charge of the management of the A400M Programme, representing Germany and France – at a ceremony in Seville, Spain.

It is a great pleasure to see two of the leading OCCAR nations receiving these superb aircraft on the same day in a year when the organisation is itself celebrating the 20th anniversary of the signature of its Convention. This is testimony to the effective work performed by OCCAR’s A400M team over many years in managing this exceptionally complex programme.

These latest deliveries were the 60th and 61st A400Ms to be handed over and take the German and French fleets to 18 and 14 aircraft respectively. The photo shows the Airbus and OCCAR delivery teams, and French and German crews in front of the two aircraft following the official handover ceremony.