Boxer Programme Division reaches the delivery of the 100th Boxer 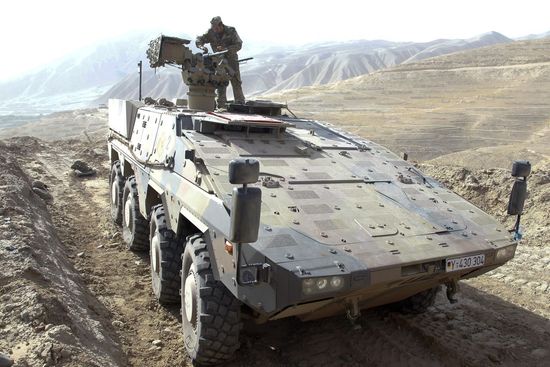 The BOXER Programme Division celebrated the delivery of the 100th BOXER on the 20th of January 2012. Delivery of the vehicles to Germany is not yet at full speed, but sufficient BOXERS are delivered by the ARTEC consortium to support the training of the German troops in preparation for the operations in Afghanistan. Since August 2011 five BOXERS of the armoured personnel carrier (APC) type have been operating at full extend in Masar-i-Sharif. The cooperation between the military logistics chain and industry on site works well and the vehicles have not shown any major problems. Much to the satisfaction of the crew, a driver: “It is a major step forward, it has great off-road capabilities, has a lot horsepower and huge acceleration, I am very happy with it”.

In February 2012 another 20 BOXERS will become operational in Afghanistan for the German army. That will be the first time the command-post version will be in full operations. It is equipped on the outside similar to the APC version, but inside it carries a considerable amount of command and control systems. With the remote-controlled weapon station and the cameras that both versions have, the vehicles are perfect for operation by night. One of the vehicle commanders: “In the evening when the light diminishes, we first use the image intensifier, but that has it limits. We then switch to the thermal image camera which has a lot of advantages. With the high deployability because of its protection and mobility, we can use the vehicle very effectively”